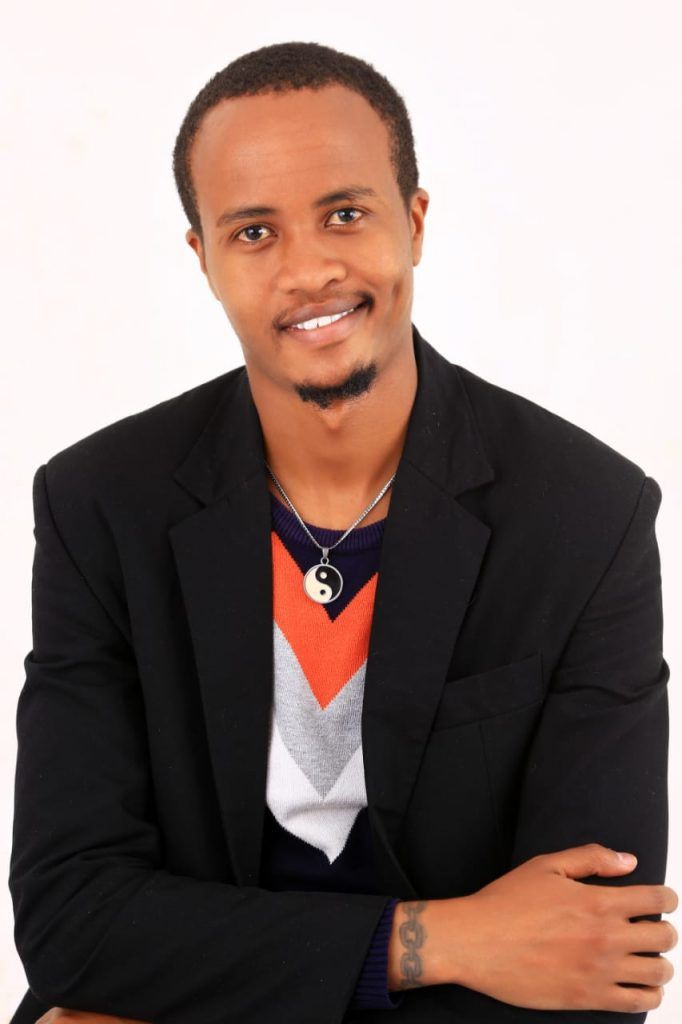 I have one question for you.

Do you believe in reincarnation?

Reincarnation is the idea that after we die, we come back as new versions of ourselves. Ambasa Mandela, who believes in reincarnation, offers an explanation.

Ambasa Mandela, a Kenyan activist for peace and togetherness, is a former Sarabi Band member. The musician is acclaimed for his genius vocals which listeners have termed “healing”.

And I agree. His voice blends well and flows with the tunes blowing from his beats, giving a calming and soothing effect. He has the sort of vocals you’d want to listen to on repeat. Mandela is the hit-maker behind tracks like Fantastic Love and Hakuna Matata (In his first E.P., Ona Sasa), among other singles on spiritual awakening, featuring Prince Yaba Doo and Uhuru Republic.

I knew all these about him yet still wanted him to define himself. His answer came riding on poetic waves.

“I am many in one; many characters that come and go. Apart from being a musician, I am a lover of fashion and design; music; teaching; and sharing with people…”

After officially disbanding Sarabi Band in 2017, Mandela struck out alone, doing music on both a personal and universal level.

I asked him, “Why music?” His response, “Music is my prison and I am its prison. I am trapped in it just as it is trapped in me. It is my medium to communicate with my ancestors, and with anyone in the universe. Music is a gift from God, and I say so because even the heartbeat — which signifies life — is in a rhythm.”

Mandela knows the topic of African Spirituality like he knows his passion for music. Firm and determinedly decided.

“Some people see me talk about spirituality and they write me off as a lunatic deserving a bed at a psychiatric facility.” He laughs. I have a feeling his laughter is just but a segue to a deeper explanation, and because I ache to listen, attentively so, to every word this genius vocalist says, I hold myself from interjecting.

“The spirituality of Africans is important,” he continues. “We were born with it. Okay? It was never taught to us. Look at a candle. Have you seen anyone teach it how to burn?”

“That’s the point. No one teaches a candle how to burn. You only have to ignite it. Our African spirituality is inborn; innately deposited. No one can teach us about it, but we can ignite it. A good example is the music track Transmission which I recorded with Amyra. It serves to ignite our spirituality, shepherd us back to ourselves.”

Transmission is a music track written by Amyra Mah, who then invited Mandela to infuse it with his genius and healing vocals. Their end goal? To awaken Kenyans to their true power, which is an important goal as we inch closer to the 2022 elections.

“Spirituality is oneness with yourself. You can call it self-love. If Kenyans attain that, you will never hear of election violence,” Mandela adds.

Before we circle back to the track Transmission, I’d like you to meet someone. Amyra Mah.

Amyra Mah had lived in Thailand for a few years when she came to Kenya for the first time in 2007. When the 2007/2008 violence broke out, with tribe rising against tribe immediately after the results of the elections were released, she was living at a friend's place in Lavington.

The violence shook her. She recalls being sternly warned against stepping outside.

“I was strongly advised to stay indoors. My friends had gone away, leaving me alone in the house,” Amyra remembers.

“After some days, I decided to step out of the compound. I remember stepping onto the reddish earth on the rough road. The hypnotic muffled thuds of falling feet of people going to places lulled me to a state of heightened awareness. A surge of life force rushed through me; I felt vastly connected to the natural elements around me. I sensed life emanating from the people, their inner light so bright and whole. There was a pristine energy in the earth, alive and conscious. Never had I felt so embraced into a sense of home and belonging: old and of the soul.

"I sensed something perfect – something prized – that once upon a time existed in this country. The embodiment of the original blueprint of humanity. In an instant, I was transported back to ancient times – where and when in the linear timeline I did not know. The Age of Innocence. Before we had forgotten our powers.”

But then, Amyra noticed a stark difference. She explains, “By contrast, I also witnessed violence and aggression both on TV and on the streets. It was so contradictory to the power I experienced beneath the superficial layer. People were blind to this enormous, invisible power that they have! It was this invisible force that kept calling me back to this land. Whichever country and continent I went to afterwards, that invisible force reached out to me, showing me that the key to reawakening humanity was found in Kenya. It made sense since this region [Kenya] is known to be the birthplace of humanity, 'the cradle of civilisation'. I was given a vision of a full-circle effect when humanity would once again realise its true nature. I knew I had work to do in Kenya.”

Amyra Mah, who says the heartbeat of the Kenyan land called her, is a spiritual teacher and healer who “follows divine guidance”. The writer at Unusual Wisdom defines herself: "I am a vessel for higher knowledge and power. At the same time, I am also a normal human, with my own issues and limitations. I am not Enlightened (in the classic sense like Buddha was); I am on my own path of growth and expansion, just like most people."

After her first trip to Kenya, she returned several more times, due to a blossoming romance, before finally making Kenya her base in 2015. She then delved into what she calls "invisible work", setting the stage for her transformative work in Kenya.

“Last year (2021), I started getting nudges to focus on the nation’s healing for 2022. A sense of urgency was instilled in me. Transmission is the culmination of all my invisible work for Kenya since then. It is the physicalised form of something I had begun building in the unseen dimension for a year; therefore, much power is unleashed with the release of the track beyond just the sound waves.”

“Where did the idea for the track come from, and why is that track unique from any other song?” I ask.

“I was given a ‘spiritual mandate’ to create and distribute a music track to awaken Kenyans to their divine powers. In a single moment of awareness, I received the whole concept. I knew what kind of music it would be, and how it is a potent tool to deliver healing frequencies to the land and people. Several days later, words poured into me. It was a verbal transmission. Within ten minutes, I had typed it all out. These became the lyrics of the music.”

Amyra goes on, “This track is different from other songs because it is embedded with conscious energies. Every word, enunciation, musical note, tune, beat, rhythm, instrument, melody, and sound has been encoded to heal the listener.”

“Yes. Heal traumas, clear blocks to accessing inner power, activate love and connection, remove density and darkness, dissolve rigidity and promote fluidity, heal the roots of what drives conflict and wars, and stoke the inner flame of the ‘Kenyan Power’.”

“Is the Transmission project only for this electioneering period?”

“No. I did not know it, but apparently, this project is meant to continue after the elections. It was Mandela who conveyed it to me. He has ideas that will take my vision further than I had thought. After the elections, we will continue to build on what we will have achieved. Ultimately, it is not really about the elections. The elections are simply a window of opportunity; a powerful time to elevate souls.”

Amyra believes that this electioneering period is a powerful time and opportunity to elevate souls because "there is a certain fear and apprehension in the air before the elections". She explains that this can be powerful, as people are paying attention, and are open to something new and different. It makes the environment conducive for a divine transmission to be received, propelling the people to new levels of empowerment.

After writing the lyrics of Transmission and through her vision seeing the track come to fruition, Amyra approached super producer Dylan-S. She asked Dylan-S whether he knew of a vocalist who’d be interested in collaborating with her.

Dylan-S, having worked on many other music tracks with Ambasa Mandela, had an answer. He recommended Mandela.

“Is he spiritual?” Amyra asked Dylan-S.

“He is very spiritual,” came the answer. “He is an activist, and his songs are about healing.”

That was all the confirmation Amyra needed.

"When I received the mandate to create the track, it included having a male vocalist sing two verses of it translated into Swahili. As I got to know Mandela, it occurred to me that he was the guy I had 'heard' when receiving the mandate," says Amyra.

At that time, Ambasa Mandela was in Dar es Salaam, in neighbouring Tanzania. Dylan-S reached out to him and after explaining what the project was about, Mandela agreed to be a part.

“Dylan-S sent me the track in which Amyra had spoken-sung the first parts. I immediately went into my studio in Dar es Salaam and added my vocals, translating the lyrics to Swahili.”

Amyra says that the moment she heard Mandela’s genius vocals weave through the track, she knew that their connection through Dylan-S was spiritual. Earlier, she had spoken to Mandela on a video call before he worked on the track, and she says she "felt the connection". Everything had fallen into place. The two began their journey, using the track to heal the land of Kenya and her people.

Oneness with yourself, as Mandela puts it, is the key to peace and togetherness. "Go back to your inner self; the real you. Do not fear to be yourself. Fear is there to distract and feed on you. Trust me, someone out there wants to see you just the way you are. So, be you. And when things get tough, don't get tougher. Relax and go back to yourself."

The lyrics of Transmission begin: Dearest child of the land. Do you know yourself? How special you are? In your soul, within you, there is infinite power waiting to serve you...

Also Read: Amyra Mah Narrates Her Calling to Help Heal the Land and People of Kenya

Featuring former Sarabi Band musician Ambasa Mandela, who is also an activist for peace and togetherness, Amyra recorded Transmission, a track that awakens Kenyans to lead in global consciousness. The music carries powerful transmissions for the land of Kenya and her people. Stream it here.

To book a private session with Amyra, join a group workshop, or attend her Soul Alignment Circles and customised retreats, contact her here.

Amyra Mah and Ambasa Mandela will be streaming Live on Instagram on 4th August 2022 at 4:00-5:30 pm EAT. The session, called The Rising, will focus on igniting one’s inner power. Amyra will perform high-level energy work, while Mandela will sing live. Together, they will bring in higher wisdom and frequencies to leave the audience with a visceral sense of their power inside.